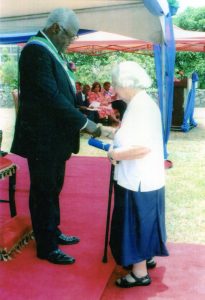 1 thought on “Congratulations to Sr. Teresa McKeon on receiving Order of Rokel”