It is with deep regret that we announce the death of Sr Hilary Lyons, President of SLIP. Sr Hilary died peacefully on Jan 11th. She was born on Feb 6th 1924 in Co Mayo. She joined the Holy Rosary Sisters in February 1943 as she believed she had a call to serve people in Africa. She studied medicine in UCD and on graduation in 1952 was sent to Sierra Leone. She worked in Serabu for 42 years. Her dream of founding a hospital there was realised in 1970.She excelled as a surgeon and a midwife. She was recognised by the royal College of Physician in Ireland when they awarded her an Honoroary Fellowship in 1962.
She has been a much valued member of Sierra Leone Ireland Partnership since her return to Ireland. She will be sorely missed.

Happy Independence Day to all Sierra Leoneans in Ireland from the Sierra Leone Ireland Partnership. 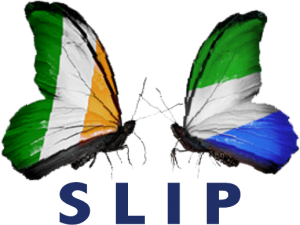