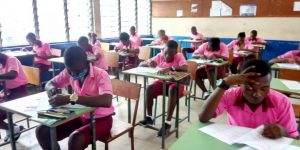 The Basic Education Certificate Examination (commonly known as BECE) is the exam that pupils are expected to pass in order to graduate from junior secondary school to  be admitted to the senior secondary school in Sierra Leone. The exam is taken by those who have already done three years of secondary school studies.
Normally, this exam takes place around July but due to the covid-19, the Ministry of Basic and Senior Secondary School Education has scheduled it for 14th to 28th September this year.
The candidates taking this exam are required to follow the covid-19 precautions. The temperature of each student is checked before they are allowed into their respective examination halls; use of face masks while moving around, and social distancing is facilitated.
Certain schools with sufficient seating accommodation have been identified as examination centres. This means that candidates from particular schools are grouped at a particular centre.
I am including some pictures taken of candidates taking the exams at some of the centres in Bo and Lunsar (southern and northern Sierra Leone respectively).
Covid-19 weekly updates
Between September 14th and Sept 20th 2020 there are 57 new cases,
0 deaths
Accumulative confirmed cases – 2168
Active cases – 446
Death – 72.

Completion of exams will lead to complete re-opening of schools on October 5th in SL:

The coronavirus cases in Sierra Leone are slowly but constantly on the rise. The good news, however, is that there is a very good record of recovery. At the beginning of the week,  on Monday, August 31, we had a total of 2026 accumulative confirmed cases; the total number of active cases in treatment centres across the country is 362; whereas 1594 had already recovered and have been discharged from treatment centres. Sadly, 71 people died since the outbreak of the virus in Sierra Leone on March 31, 2020.
At the close of the week, we have the following statistics:
Accumulative confirmed cases – 2054
Active cases – 377
Recoveries – 1606
Death – 071
Therefore, there had been 28 new cases, 12 recoveries and 1 death between Monday (August 31, 2020) and today (September 6, 2020).
Compiled by Rita Foday, SL

Grant for SL student to pursue education in Ireland

Grant for SL student to pursue education in Ireland

Use the link below to find about this grant opportunity for Masters education programme.  If this is not of interest to yourself perhaps there is a person you know who might be eligible to take up the opportunity. 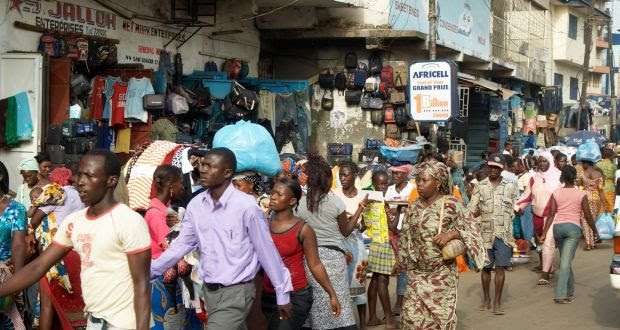