RTE TV Programme ‘What in the World’ has special feature on ebola in Sierra Leone focusing on the poverty and under resourced health system which greatly contributed to the fertile environment for the spread of the disease.

The link for the feature programme on the ebola period in Sierra Leone can be found at the link below:

See recent report from Amnesty international on the exclusion of pregnant girls from school imposed by the SL Government.

The delegation comprising Fr. Austin Healy CSSp, Mr. Frank Roden, Geraldine and Jim Owens returned from a most informative, enjoyable and consequently worth while 2 week trip on the 17th November.  They travelled to many parts of the country including Bo, Kenema, Pendembu, Makeni, Sewafe, Yengema, Koidu and Freetown.

When they visited Freetown they were kindly invited by Ambassador Campbell for dinner at her residence.  They were joined for the occasion by 2 members of the Spiritan congregation Superior Fr. John Fella and recently ordained Fr. Emmanuel Bureh.

The Ambassador congratulated SLIP for continuing to support links between the 2 countries. Discussions were wide ranging, with the visitors who were ‘old handers’ in Sierra Leone telling stories of past experiences and exploits while the Ambassador also shared some stories of her immersion into her new post in recent months.

The Ambassador posted  congratulations to SLIP on the Twitter account, details of which can be found on the link below: 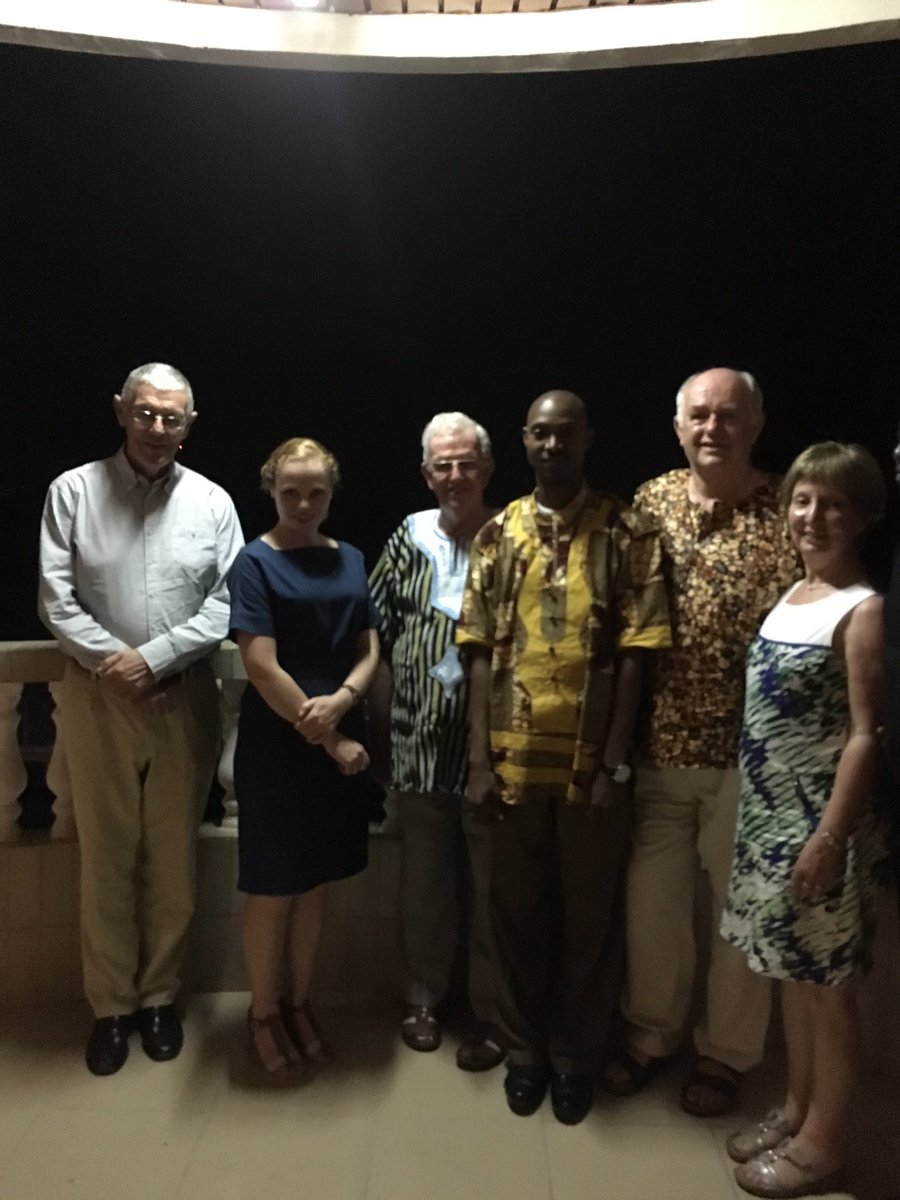 The Minister for Foreign Affairs and Trade, Mr Charles Flanagan, T.D., has announced the names of the recipients of the Presidential Distinguished Service Award for the Irish Abroad for 2016.

The Presidential Distinguished Service Award was established by the Government following the 2011 Global Irish Economic Forum as a means to recognise the contribution of members of the Irish diaspora and the first awards were made in 2012.

Nominations are made by Irish communities abroad through Ireland’s network of Diplomatic Missions.
Announcing the recipients of the 2016 Awards, Minister Flanagan said:
“I am delighted that once again we have the opportunity to recognise some of the finest members of our diaspora for their contribution to Ireland, the Irish community abroad and Ireland’s reputation. In the ever changing world we live in, this remarkable group of individuals have been a constant beacon for Ireland and the values we hold dear.
“This year, for the first time Awards will be presented in the category of Science, Technology and Innovation, reflecting both the important place of this sector in our dynamic economy and Ireland’s track record of achievement in this area. Receiving an Award in this category is Garret FitzGerald who, in his role as a globally recognised research physician and scientist, has continued to be an active member of our diaspora and is closely engaged in facilitating scientific endeavour in Ireland.
“This year’s recipients also include the late Sir Terry Wogan who will receive a posthumous award. Through his long and universally acclaimed broadcasting career, he always reflected all that is good about Ireland and the Irish community in Britain.”
Minister for Diaspora Affairs and International Development, Joe McHugh T.D, added:
“This year’s Presidential Distinguished Service Award recipients signify the breadth and richness of our diaspora. They include those working with the most marginalised and vulnerable, those who have become the voice for those who have none.
“Through their work as community activists for many years in New York, Brendan Fay and Kathleen Walsh D’Arcy have secured rights and recognition for LGBT members of the Irish community. And, in the very challenging environment of Sierra Leone,
Sr. Mary Sweeney has worked tirelessly for local communities and most recently she has played a significant role in coordinating a response to the Ebola epidemic.”

The full list of recipients of Presidential Distinguished Service Awards in 2016 are:

The Awards will be presented later this year by President Higgins.

The Presidential Distinguished Service Award for the Irish Abroad is neither to be an honours system nor does it confer any legal entitlements upon the recipients.

In order to be eligible for consideration, nominees must be habitually resident outside the island of Ireland and are required to satisfy the following additional requirements:

Angela Brady (UK)
Angela Brady is a Dublin-born architect, TV broadcaster and former President of the Royal Institute of British Architects. She is currently Director of London based Brady Mallalieu Architects. She was made a British Council Ambassador to Vietnam for Innovation and Design and has also worked with the British Council in the Near East. Angela promotes architecture on TV, radio and in publications.
She is very active in the Irish community, particularly among the business networks, promoting Irish business and design talent. Ms Brady also made a significant contribution to the success in Britain of the Year of Irish Design 2015.
Terry Wogan (Deceased) (UK) – presented posthumously
Sir Terry Wogan was a universally-known Irish broadcaster who spent most of his career with the BBC. He passed away in January 2016. Throughout his career, he was a respected and loved representative of the Irish in Britain. The reaction to his death highlighted the significance of his contribution to the community, particularly in the 1970’s and 1980’s.
Sir Terry’s rise to the highest ranks of broadcasting in Britain was recognised when he received a knighthood in 2005.

Robert Kearns (Canada)
Robert Kearns is a key figure within the Irish community in Toronto and has been instrumental in creating the Ireland Park Famine Memorial Park along the quayside in Canada’s largest city. He is now engaged in creation of a new memorial in Toronto, Grasset Park, to commemorate the Canadian medical staff who died administering to the Famine Irish.
Mr. Kearns is a successful business man and member of the Global Irish Network. He has assisted a number of Irish firms enter the Canadian market, including providing free office space for one such company. He chaired the Ireland Fund of Canada for six years and helped raise funds for integrated education in Ireland.

Gerald Lawless (UAE)
Gerald Lawless has had a distinguished career in the hospitality sector in the United Arab Emirates, serving as CEO of the Jumeirah Group for 18 years and is a member of the Global Irish Network. This year he was appointed Chairman of the World Trade and Tourism Council.
Throughout this time he has played a leading role in the emergence of a strong, vibrant Irish community in Dubai. As a prominent member of the wider Dubai business community Gerald has used his position to advance Irish interests e.g. making it possible to “green” the Burj Al-Arab Hotel. He is currently Vice-President of the Dubai Irish Business Network.

Norman McClelland (US)
The son of Irish emigrants, Norman McClelland, is a businessman and philanthropist based in Phoenix, Arizona. His philanthropic endeavours have spanned the creation of one of the largest urban parks in the world; through sustained support for the St. Mary’s food bank, to whom he gives 80,000 pounds of food per month; and donating the college of management to Arizona State University; to the building of the Phoenix Irish Centre, Library and Genealogical Centre.
A member of the Global Irish Network, Mr. McClelland is proud of his Scots Irish heritage, with roots in Newry, and works hard to support an open and accepting Irish identity, inclusive of all the traditions of the island.
Irish Community Support

Nora Higgins (UK)
Nora Higgins was born in Milltown, Co. Galway, and immigrated to Britain in 1955. She trained as a nurse in Edinburgh and Glasgow before coming to London in 1960. Shortly afterwards, Nora become a member of the Management Committee of Southwark Irish Pensioners’ Project in South London and has been involved with this organisation ever since.

She is currently Chair of the Southwark Irish Pensioners, one of the largest Irish community organisations in south London. The organisation provides a lunch club and welfare support and outreach to hundreds of vulnerable older Irish people in the area. Ms Higgins has been a tireless campaigner for older Irish people in Britain and spoke about her experiences as an emigrant in the 1950s in a very moving and memorable intervention at the Global Irish Economic Forum in Dublin in 2013.

Brendan Fay (US)
Brendan Fay, a community activist, theologian, filmmaker and public speaker, is Co-Founder of the LGBT group, Lavender and Green Alliance. He was also a founding member of the Irish AIDS Outreach organisation in 1996 which sought to break the silence around AIDS in the Irish community in New York. He has been active on immigration reform (UAFA), civil marriage, AIDS awareness and human rights.
Brendan has been an activist for LGBT rights, and in particular Irish LGBT rights, in New York for several decades, forming the inclusive St. Pat’s For All Parade in 1999 as an alternative to the 5th Avenue Parade. Along with Kathleen Walsh D’Arcy, he worked for years to secure the right of Irish gay groups to march in the St. Patrick’s Day Parade in NYC, a right which was finally won in 2016.

Kathleen Walsh D’Arcy (US)
Kathleen Walsh D’Arcy is Co-Founder of the LGBT group, Lavender and Green Alliance. She is a writer, social worker, community activist and formed the inclusive St. Pat’s For All Parade in 1999 as an alternative to the 5th Avenue Parade. Along with Brendan Fay, she worked for years to secure the right of Irish gay groups to march in the St. Patrick’s Day Parade in NYC, a right which was finally won in 2016.
The daughter of 1920s immigrants from Counties Offaly and Tipperary, she co-edited two fiction collections by Irish women writers, Territories of the Voice (1990) and A Green and Mortal Sound (2001).

Martin Von Hildebrand (Colombia)
Martín von Hildebrand is an ethnologist and activist for indigenous and environmental rights who has played a key role in protecting the Colombian Amazon from illegal resource exploitation, principally mining, and in ensuring that indigenous communities living in these areas can exercise their legal and constitutional rights to manage their territories.
Von Hildebrand was born in the US of an Irish mother and a German father. He studied in UCD in the 1960s, as well as at the Sorbonne and has devoted his life’s work to promoting economic, social and environmental rights in the Colombian Amazon. In the 1990s, he founded the Colombian NGO, Fundación Gaia Amazonas which works to empower indigenous communities in the Amazon to exercise their constitutional rights to protect and manage their own territories, to protect the Amazonian ecosystem and support sustainable livelihoods and food security and sovereignty. Mr Von Hildebrand is now working on a project to connect and protect the interdependent ecosystems of the Andes, Amazon and Atlantic Coast of South America, spanning a number of countries including Colombia, Brazil and Venezuela.
Sr. Mary Sweeney (Sierra Leone)
Sr. Mary Sweeney has worked tirelessly for over forty years, often with limited support, in the extremely challenging environment that is Sierra Leone. Through her efforts in establishing the St Joseph’s School for the Hearing Impaired in Makeni, she has given education, skills training and life opportunities to the most vulnerable of people; children with a disability in a developing country. Notably, she remained in Makeni to keep the school open during the brutal civil war in the 1990s, and more recently she has played a significant role in coordinating much-needed support for the Ebola response in Makeni.
Sr. Sweeney has in recent years widened her ambitions and focussed her energies on promoting the development of a curriculum for the training of teachers for special needs education in Sierra Leone.